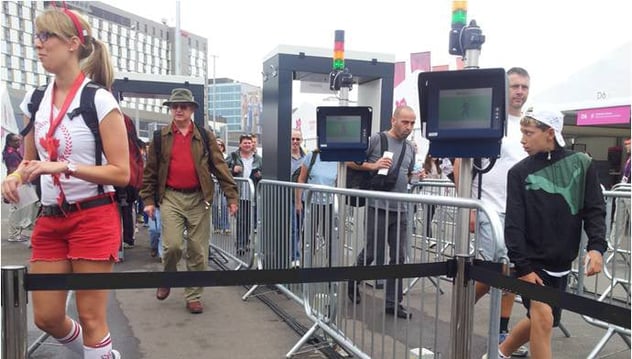 To combat this problem, Mirion Technologies developed its FastTrack technology, which has the capacity to distinguish between sources being carried through the monitor, and any sources of contamination present nearby. This helps reduce false alarm indications in a variety of settings, and is particularly useful in high background areas or situations in which a high number of measurements have to be made, such as an outage at a nuclear power plant, or a radiation security checkpoint at an airport or large scale event.

This improvement over conventional portal monitors is achieved by utilizing an array of three (or more) detectors arranged horizontally, as opposed to traditional portal monitors, with only a single detector panel in each pillar. This setup, combined with an improved processing algorithm for analyzing readings, permits the portal to correlate the timing of individual detector signals with the movement of objects/people through the portal.  Based on this approach, the portal can reliably distinguish between sources being carried through the monitor and sources (or dynamic background fluctuations) originating from outside the monitor. At the same time, this allows particularly high measurement frequencies.

FastTrack technology combines this detector arrangement with advanced measurement algorithms, which eliminates the most common causes of false alarm indications in portal monitors. In this "walk-through" mode, vehicles or pedestrians can simply pass through the portal at relatively high speeds without having to stop. This functionality is available without compromising MDA (Minimum Detectable Activity) levels.

Fastrack Technology in the Field

A major opportunity to demonstrate the effectiveness of the FastTrack technology took place in Japan. Mirion was invited to conduct a test of the FastTrack-Vehicle™ monitors outside of Fukushima.  The main goal was to determine how the monitor would function in a high background area, as the presence of radioactive contaminants in the soil raised the background activity to around 1–2 μSv/h (0.1-0.2 mrem/h), which were roughly 10-20 times the normal background level. 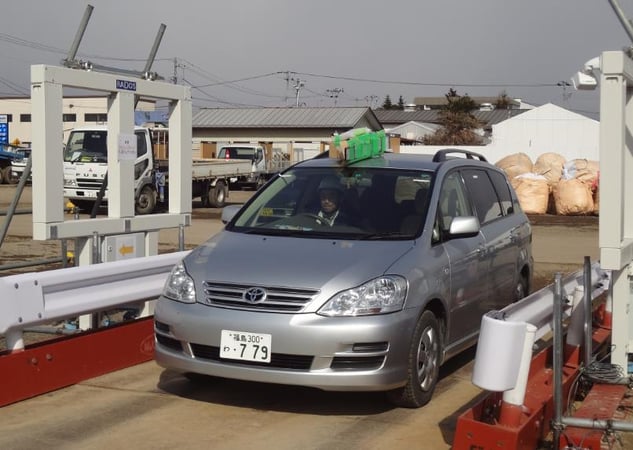 The FastTrack-Vehicle™ monitor in use outside of Fukushima, Japan

Despite initial concerns that steel plates would be needed in order to shield the detectors from the high background, the FastTrack technology worked exceptionally well in this environment.  Without the shielding, it was able to meet the MDA (Minimum Detectable Activity) standards of 4 Bq/cm2 of Cs-134 at walking speed, with the detector pillars placed 6 meters apart.

Another significant demonstration of the capabilities of the FastTrack technology came as part of a counter-terror measure taken at a major sporting event in London. The FastTrack-Fibre™ portal monitor was utilized as part of a layered system designed to systematically screen every single spectator, official, participant, etc. and pinpoint any specific individual of concern, who could then be discreetly diverted for more in-depth investigation.

Schematic of the radiological security setup designed for major events or venues.

Over the course of the event, the 19 FastTrack-Fibre™ monitors in place processed 4.1 million individual measurements, without a single false alarm being registered. A number of alarms resulting from persons undergoing medical treatment with radiation were identified and subsequently cleared without interrupting the screening process. 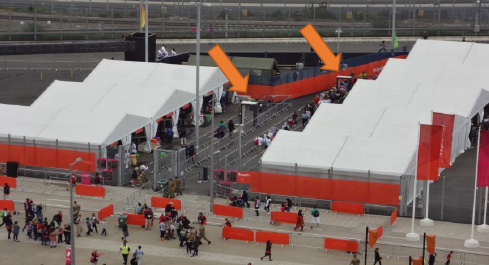 Bringing it all Together

Mirion's goal in producing the FastTrack technology was to provide a stable, accurate radiation portal monitor platform that could give the user a better experience.  Not only does it provide a broader picture of the nature of a radiological threat than is capable with traditional portal monitors, but also eliminates one of the most prevalent causes of false alarm conditions. By being able to pinpoint whether a radioactive source is located inside or outside the detector, and even the direction of movement, it becomes a valuable tool in a radiological security playbook. 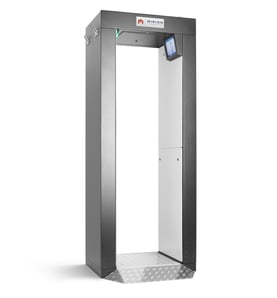 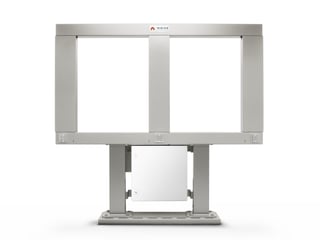 The FastTrack-Vehicle™ is a unique monitor for the screening of trucks and vehicles. It combines the FastTrack algorithm with large area, highly sensitive GammaFibre™ detectors. Through the use of specially developed filtering programs, the possibility of false alarms is reduced to almost zero making it the ideal choice for any location trying to screen trucks and vehicles. Also available as the FastTrack-Vehicle™ XL, featuring larger detectors better suited for monitoring large trucks or cargo containers.