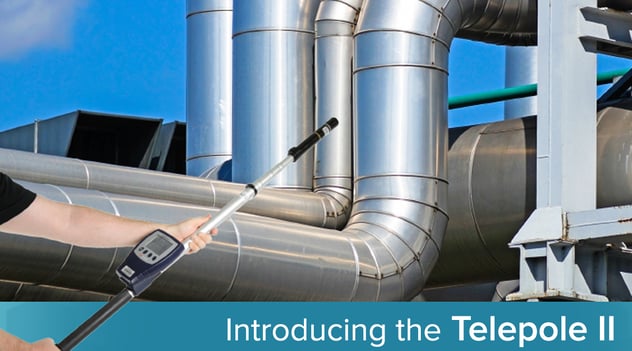 The result is the Telepole II. Designed with a combination of extensive input from users of the original Telepole and the latest developments in detector and electronics, it combines reliable and proven technology with a host of new features to deliver significantly improved performance and functionality.

Why a Telescoping Rate Meter?

An important first step in establishing what makes a good telescoping rate meter is establishing what one is, and why it is important or useful. A telescoping rate meter is primarily useful in situations where the area or material being surveyed is difficult to reach. This might simply be a factor of size, surveying large shipping containers or areas with high ceilings or the inside of long pipes. In these cases the usefulness of having a meter in which the probe is at the end of an extendable pole is self-evident.

Another case in which this becomes important, however, is when an area needing to be surveyed is difficult to reach due to the strength of the radioactive field. An important tenet of radiation safety is a concept known as ALARA, or As Low As Reasonably Achievable, meaning that the first priority is keeping worker exposures to a minimum.  This is accomplished through three methods: Time, Distance, and Shielding.  The telescoping rate meter is the embodiment of the Distance aspect of ALARA.

By keeping themselves separated as far as possible from a radioactive source, a worker using a telescoping rate meter can spend more time working while receiving a lower amount of radioactive exposure than would otherwise be possible.

What's New with the Telepole II

The Telepole II provides a host of new features that improve on both its utility and flexibility as a radiation survey meter.

The primary improvement of the Telepole II over its predecessor is that, in addition to the detectors in the probe at the end of the pole, there is also a detector in the meter itself, meaning the operator is able to keep abreast of radiological conditions both in the area being surveyed as well as their immediate vicinity. This provides an additional layer of protection to the user, as well as additional versatility to the instrument.

Other new features include a bright white LED flashlight at the end of the probe head, allowing the user to illuminate the area being surveyed for visual inspection as well as taking radiological measurements. There is also a color display with large, easy to read measurements, and large menu driven buttons that make navigation and operation extremely user-friendly.

All around, the Telepole II was designed as an innovative leap forward from the original Telepole, focusing especially on the versatility and flexibility that has become a highlight of other Mirion product lines (notably the DMC 3000 and RDS-31).

Who Should be Using a Telepole II?

Ultimately, anyone who needs to conduct radiation surveys where keeping a distance from the area/item being surveyed is necessary will find them useful.  However, there are a couple areas where they become particularly useful. 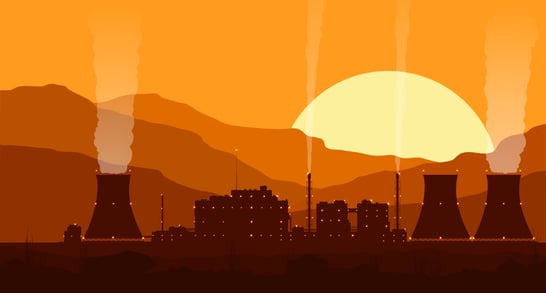 The first is, obviously, nuclear power. The prevalence of radioactive material and the need to perform regular surveys on various operational areas and on specific items such as casks or shipping containers makes a telescoping survey meter an extremely valuable tool. The ability to network into a telemetry system is also very useful in this environment, as it allows a central command/observation post to monitor survey readings for several different workers at the same time, which in conjunction with other transmitted instrument readings can create a dynamic picture of radiological conditions at the plant.

Another area that could find a lot of utility in the Telepole II is the oil and gas industry. Due to the presence of NORM (Naturally Occurring Radioactive Material) as part of the drilling for and processing of oil and natural gas, the clearing of pipe, scrap metal, and instruments used by the oil and gas industry is an important task. The Telepole II, with its ability to equip a PRD detector head instead of the standard dual GM probe at the end of the pole, can be a valuable and versatile instrument for conducting both standard radiological surveys and also very sensitive sweeps for more minute quantities of radioactive materials.

Overall, the Telepole II is a significant improvement to the venerable Telepole, preserving the spirit of what made the original a workhorse of the industry, but infusing it with new purpose and capabilities. For more information on the Telepole II or its specifications, please click the button below.